Earthquake of 1952 and Urban Renewal

On August 22, 1952, an aftershock to an earthquake (July 21) hit Bakersfield. The epicenter was in the eastern periphery of the city. The original earthquake and the previous two aftershocks struck Arvin and Tehachapi. It was 3:41pm on a Friday summer afternoon. As the dust settled, the damage was extensive. While many buildings survived they did face structural damage. The damage was estimated at $23 million dollars in the City of Bakersfield and a total of 396 damaged buildings. Ninety of those buildings were torn down and 210 were repaired. In the end, a total of twelve victims of the earthquake and its aftershocks did not survive and thirty-five were reported as injured. 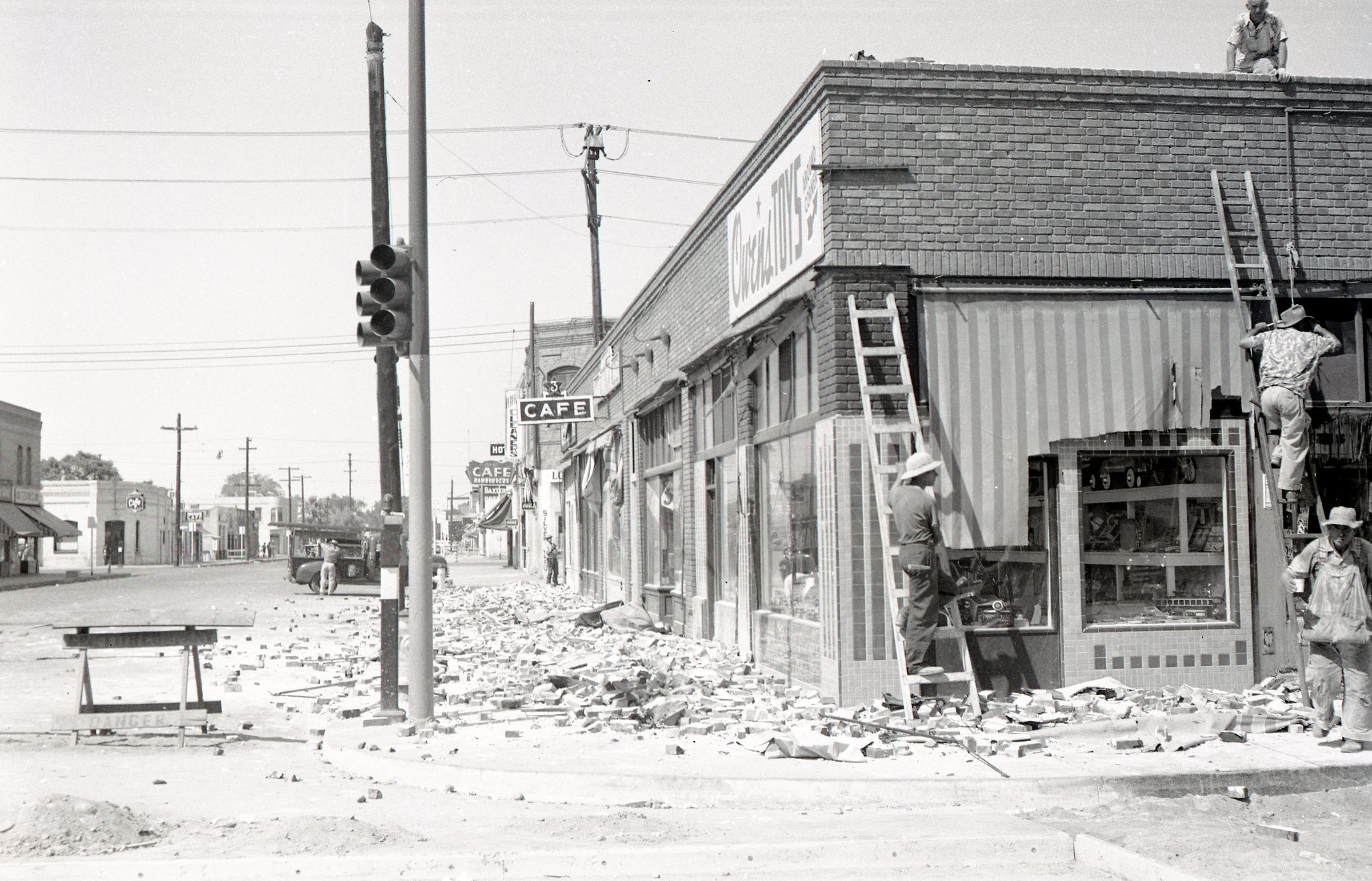 Shortly after the City of Bakersfield rebuilt and created a new urban and vibrant downtown. Many suburban areas benefited from urban renewal, however, some areas were excluded. By 1956, new buildings were already visible and the urban landscape was shifting to East Bakersfield and to the southwest of town. The Greater Bakersfield Chamber of Commerce rebranded the city as “America’s Newest City: Bakersfield, Kern County, California.” The program included a large advertising campaign, financing, agriculture and industry, and heavy manufacturing. Magazines advertised, “Homes: Built to take advantage of climate,” while others announced, “Improved industrial property awaits you in Greater Bakersfield.”

Education was vastly changed after 1952’s natural  disaster. Bakersfield College was slated to move into its new location in 1951, but the 1952 earthquake accelerated the relocation from Kern Union High School downtown to its current location in East Bakersfield. Most schools in the Bakersfield City School District were rebuilt after sustaining major damage. Out of the ten schools, only one was reported with minor damage.

In 1960, the Kern County Superintendent of Schools stated that Bakersfield was the largest isolated metropolitan in the United States to be without a senior college or university. In 1965, the California State Senate approved a proposal to build a higher education campus in Kern County. Kern State College was established, but a location for the college was not selected. The State College was to be the 19th campus in the California State College system, and it was also the only campus within a 100-mile radius to offer a four-year degree. 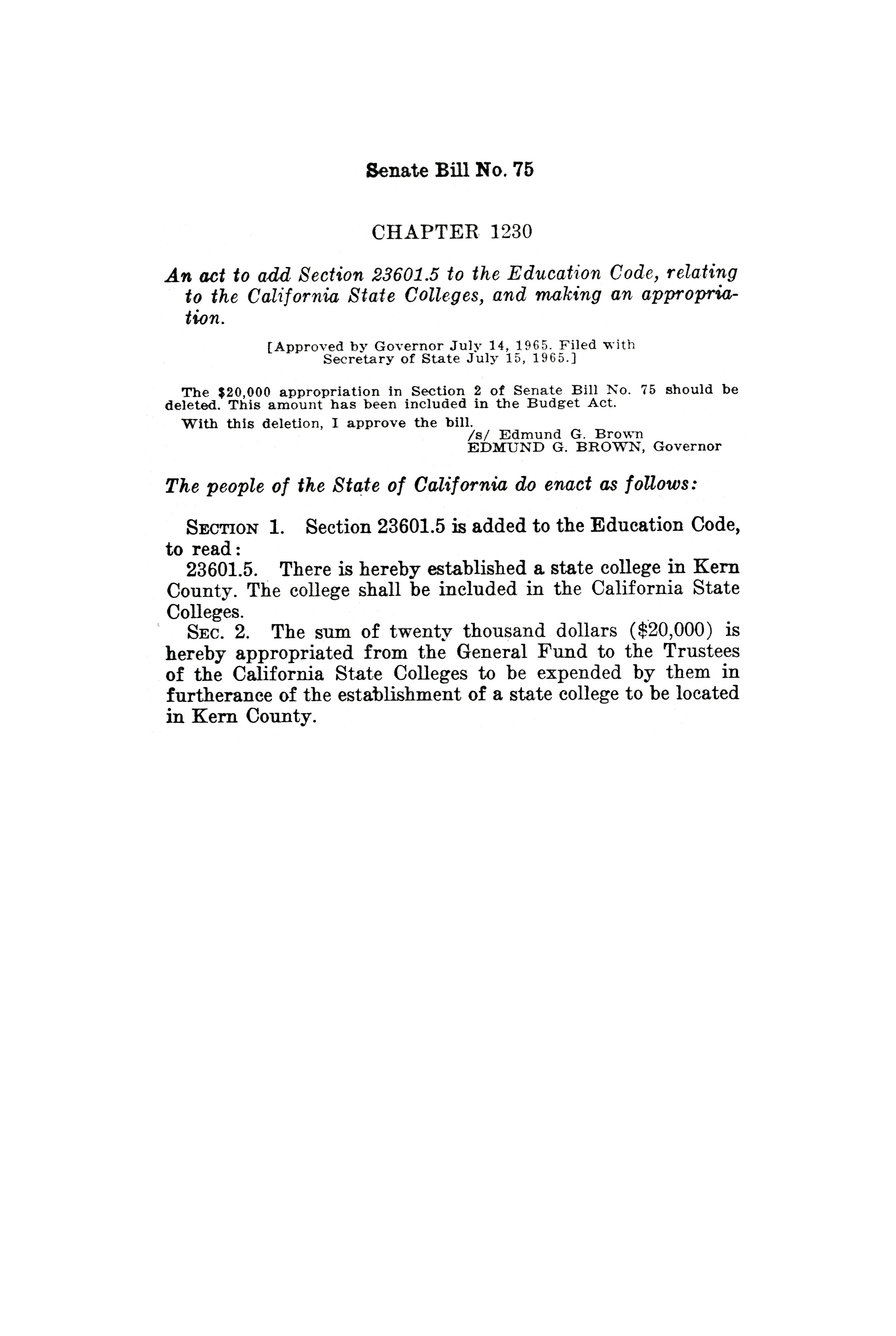 Senate Bill 75 established the planning of a State College in Kern County. The bill cited a 1959 report recommending a 4-year higher learning institution in the County of Kern. Senator Stiern argued to the California State Senate, "A great number of students would benefit from the addition of a new State College in Kern County since there are no four-year collegiate institutions in this area. College-going students from this area will continue to be isolated until a new campus is opened." Stiern knew that there was a need for higher education. As an advocate for equal education, the proposed college was also to meet future growth and enrollment rates. In 1963, for every 1,000 students 535 high school graduates were enrolling in a higher education institution in California. This was close to the state average of 559 for every 1,000. With an estimated 3,000 projected enrollment for the new State College. Planning and management were left of the immediate future. The bill established, what would later become California State College Bakersfield and subsequently California State University, Bakersfield. The bill was co-authored by assembly members Williamson and Casey.

Dorothy M. Donahoe was born in Los Angeles in 1911 she moved to Bakersfield in 1914 and worked at Bakersfield High 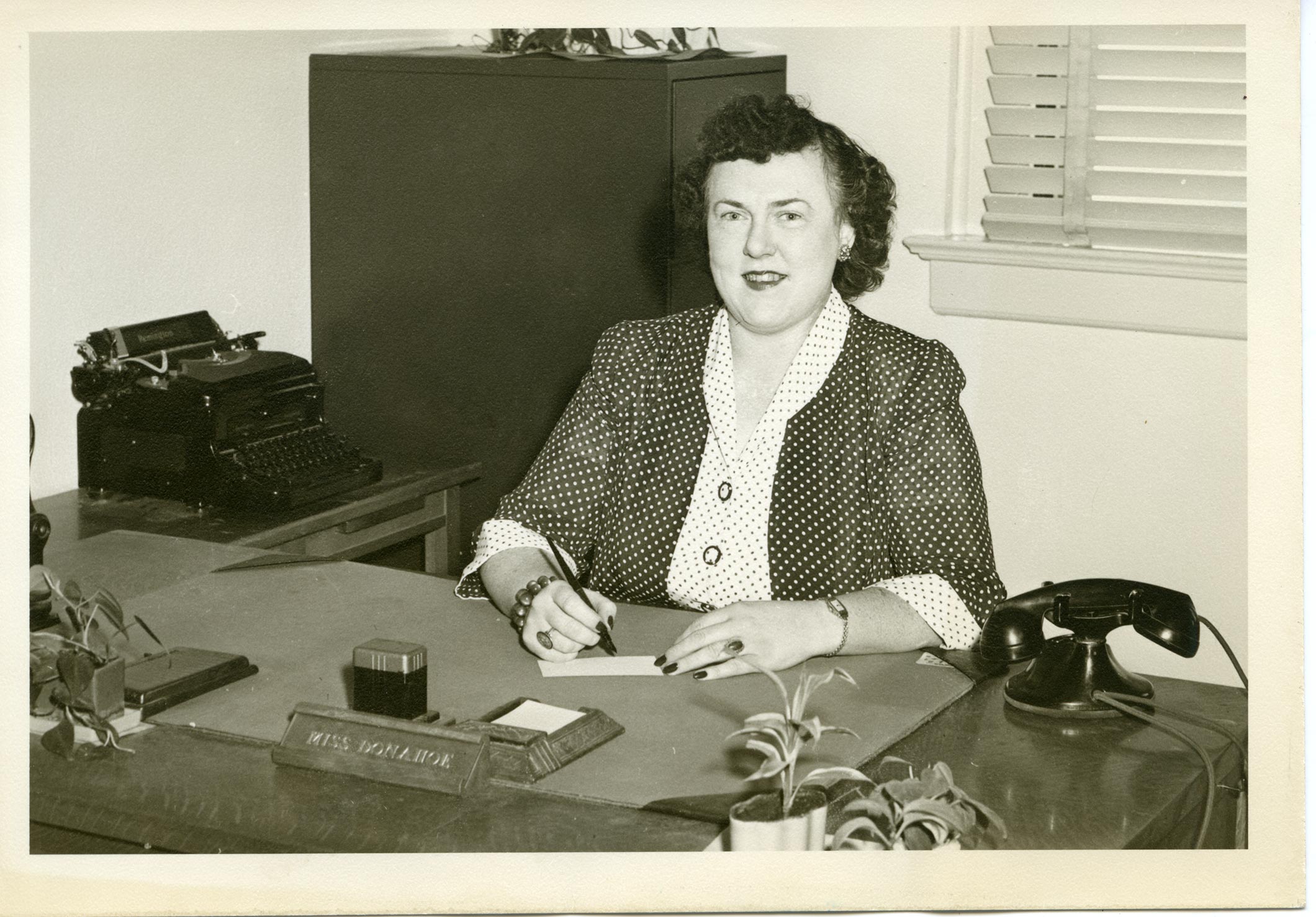 School for sixteen years. She suffered from infantile paralysis and asthma. However, this did not stop her,as she ran for assembly in a newly district in 1952 and won easily. California State University, Bakersfield named this building after her authorship of the Donahoe Higher Education Act of 1960 legislation, which established the Board of Trustees of The California State Colleges. The Donahoe Act organized the nation's largest system of higher education. This act organized the California State University, and community college system to guarantee the people of California access to higher education. 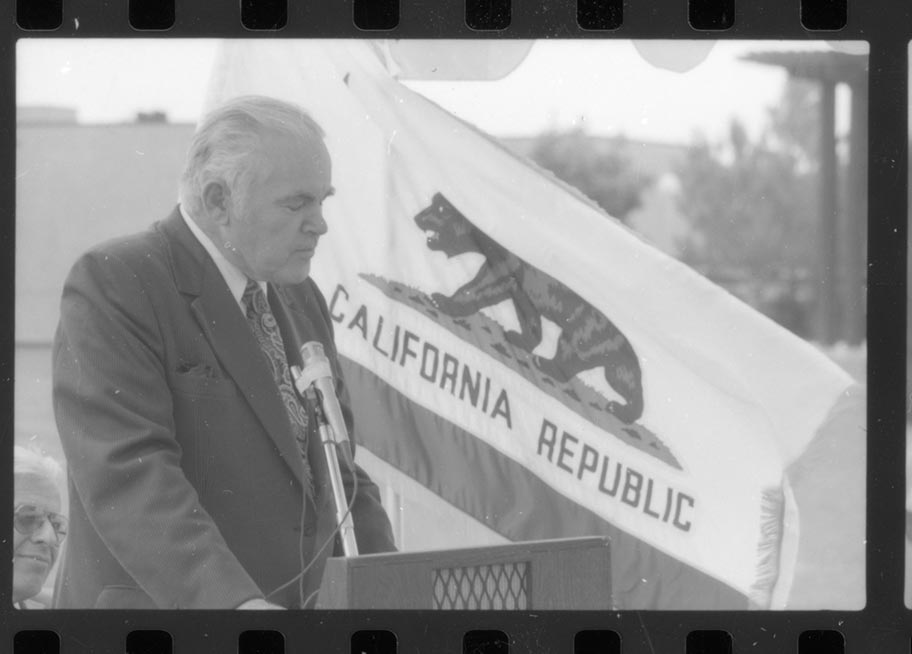 District 34 (now 16). He initially served on the agriculture and education committees. In his early years he was a supporter of Assemblywoman Dorothy Donahoe’s Higher Education Act.legislation eventually established the UC, CSU, and the California community college system. In 1965, Walter Stiern authored and proposed Senate Bill 75 that created a state college in Kern County. Walter Stiern served as a senator until 1986 when he retired. In 1988, Senator Stiern passed away. The Walter W. Stiern Library was dedicated to him when it opened in 1994, to honor his contribution to the establishment of CSUB.